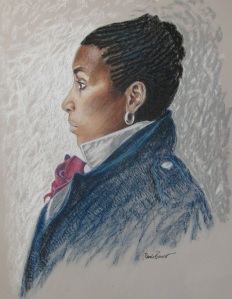 I met this person years ago. I was immediately taken with her beauty and she was taken aback that I thought her beautiful. Apparently she had been told by someone that she was not. And she believed them. It was not false modesty.

It took me a while to convince her to let me draw her. But she finally relented. I love her image so I have drawn her many times. This is the first time I’ve drawn her full color. I just let her beauty come through my fingertips on to the paper. My job was to not mess it up.

Wearing nothing but snakeskin
boots, I blazed a footpath, the first
radical road out of that old kingdom
toward a new unknown.
When I came to those great flaming gates
of burning gold,
I stood alone in terror at the threshold
between Paradise and Earth.
There I heard a mysterious echo:
my own voice
singing to me from across the forbidden
side. I shook awake—
at once alive in a blaze of green fire.

Let it be known: I did not fall from grace.

I leapt
to freedom.

6 thoughts on “An Amazing Woman”